On Friday Johns Hopkins University said the total number of cases in the country had risen by more than 40,000 to 2,483,516. It was the second record daily increase in as many days.

While some of the rise is down to more extensive testing, the rate of positive tests in some areas is also increasing.

Health officials estimate the true number of cases is likely to be 10 times higher than the confirmed total. The US Centers for Disease Control (CDC) said up to 20 million Americans may have been infected.

Meanwhile Florida has reported a new record in Covid infections, amid a surge in cases in southern US states that have allowed businesses to re-open in recent weeks.

Florida On Saturday, reported more than 9,500 new cases, up from almost 9,000 on Friday, the previous record.

The spike has led state officials to tighten restrictions on business again – as Texas also did on Friday.

The official number of coronavirus infections across the US is expected to surpass 2.5 million over the weekend.

More than 125,000 Covid-19 patients have died nationwide – more than in any other country.

On Friday the leading government adviser on coronavirus, Dr Anthony Fauci, said the US had a “serious problem”.

Speaking at the first White House coronavirus task force briefing in two months, Dr Fauci said the current rises were due to regions “maybe opening a little bit too early” and to people themselves not following guidance. 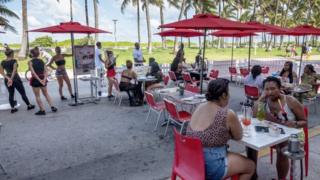 “People are infecting other people, and then ultimately you will infect someone who’s vulnerable,” he said.

Many other southern and western states have reported record spikes as they moved to reopen and people from other areas poured in in recent weeks.

Earlier this week Texas, Florida and Arizona put re-opening plans on pause in an effort to tackle the outbreak.

But on Friday, Florida Governor Ron DeSantis imposed new restrictions, orderings bars in the state to stop serving alcohol on their premises – although it was not clear how the new measures would affect restaurants the Miami Herald reported.

And in Texas, which has also seen record numbers of cases this week, Governor Greg Abbott told bars to close and limited restaurants’ indoor seating capacity to 50%.

Pensioners Appeals To Governor Wike To Use Part Of The 78 Billion Cooling Off In The Bank To Pay Outstanding Pension Allowances, Gratuities, Retirement...

Pensioners Appeals To Governor Wike To Use Part Of The 78...

Pensioners Appeals To Governor Wike To Use Part Of The 78...