A jealous housewife, Hauwa, in Kano, has allegedly killed two of her children over rivalry and because her husband, Ibrahim Haruna Aminu married a second wife.

The woman, identified as Hauwa, also allegedly violently assaulted other residents who attempted to apprehend her while fleeing the scene of the alleged crime. 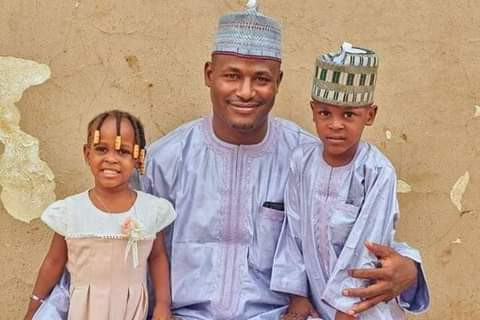 The deceased children were identified as Yusuf, 5-, and the Zahra’u, 3.

The police spokesperson for Kano State, Abdullahi Haruna, confirmed the incident that occurred at Sagagi, Disco quarters in Kano metropolis. He said the command was already investigating the situation and the suspects Hauwau Has been arrested and would face trail soon.

A community head in the area, Ahmad Bello, told reporters that the incident happened while the husband was spending time with his new wife in another house, as both women were not staying in the same house

The new Wife in hot embrace with Hauwau’s Husband

The younger brother to Hauwau Husband Sadiq Aminu, told newsmen that ever since his brother got married to a new wife two months ago, Hauwau, mother of the deceased children, have been living with envy and jealousy ever since, leading to her killing her own children.

According to him, “the incident happened when the husband was away and in his new wife’s place. “His eldest wife, Hauwau called him on phone this morning that all is not well in their house, only for him to go to the house and meet the lifeless bodies of the children in the pool of blood.

he said after Hauwau had carried out the atrocities, she ran away from the house. “She beat the children and used a knife to cut them. Her sister’s daughter (10-year-old) who was living with them was also another victim, but she survived with a cut on her hand.  we spoke with the security operatives. But we learned she went to her parent’s house.”

25Years Old HIV Positive Woman Raped At Gunpoint By Taxi Driver & Conductor In South Africa, Said She Was Scared To Reveal Her HIV-Positive...

Man Sentenced To Life Imprisonment For Raping A 14-Year-Old Girl: Reasons Why We Like Court In SW