The appointment of ADC, is not given to the strongest officers. So many things are considered. what did Governor Bello see in her that all those male ADC”s don’t have?  She is the only female ADC to a sitting Governor in Nigeria and it’s solely owing to her appointment that governor’s wife was placed under house arrest as she wanted to leave the governor’s lodge in protest.
She has been suspecting that her husband is having an affair with his ADC despite the fact that her husband as a Muslim, has right to marry up to four wives. Why would women not want their husbands to have the best things in life? especially when his religion permits?

Rashida Bello, the wife of the Kogi State Governor Yahaya Bello, allegedly moved out of the government house.

According to reports, the duo has been at loggerheads for the past three months over the governor’s alleged affair with the ADC, Ms Ifeoma Akaya.

The development did not sit well with the governor’s wife and seemed to be a significant disadvantage.

Sources also disclosed that Yahaya Bello allegedly placed his wife “The First Lady“ on house arrest and sacked her orderly, including all her Aides. The governor’s wife packed out of the govt lounge because  of this same Ifeoma. The Governor and the  said ADC is alleged to be dating each other. 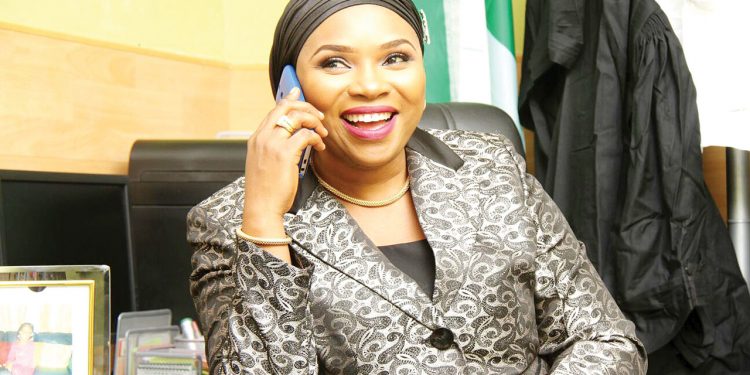 But in a swift reaction The Kogi State Government has described as “malicious” Social Media reports alleging that Rashida Bello, the wife of the State Governor, Yahaya Bello, has moved out of the Government House.

The Chief Press Secretary to the governor, Onogwu Muhammed, in a statement on Monday Said  that the allegation was baseless. He said, “Bello is in full control of his household, the same way he holds in firm grip the affairs of the state.”

Mohammed, who described the publication as a mere piece of mischievous antics given life by idle, disgruntled and undesirable elements, said the governor was in full control of his household. He maintained that there was no crack whatsoever in the home and government of Bello, urging the general public, particularly citizens of Kogi State, to discard the information.

Who is She is Mss Ifeoma Akaya
She is the current ADC to the Governor of Kogi State.
For the first time in the history of Nigeria, a female officer was appointed as aide-de-camp (ADC) to a governor.
This development is credited to Gov. Yahaya Bello. It is on record too that Mss Ifeoma Akaya is the only serving female ADC to a Governor in the country. Mss Ifeoma, is a daughter to Charles Akaya, a former commissioner of police.
Women are Powerful and Influential too.
Ms Ifeoma Akaya Also Servicing Other Areas?Rift In Kogi Govt House Over Amorous Affairs: Rashida Not At War With Yahaya -Is Governor Yahaya Bello's ADC
0 comment
0
FacebookTwitterLinkedinWhatsappTelegramEmail
previous post

First in History! Another Esau Plays With His...

First Lady Of Imo State At...