Unconfirmed reports says Six of the IPOB terrorists members have been captured and the Second in command also killed in a Sting Operation in Imo state.

The joint operation carried out by Nigeria Police Force, the Army and Department of State Security Service (DSS), carried out in the early hours of today, April 24, 2021  when the joint security operatives stormed the operational headquarters of suspected local militias group identified As IPOB in Awomama Village, Oru East Local Government Area of Imo State.

The report said in the aftermath of the Attacks that was repelled by the Gallant Nigerian Joint Force Saw the fall of the the second commander of IPOB ESN (Eastern Security Network) Commander Ikonso Who is also known as the Vice President designate as well as the coordinator of all the militia operations of the group. He was the alleged  mastermind and coordinator of the attack on the Imo Police Headquarters and several other attacks on security and military personnel and facilities.

is ESN is also said to be the militia wing of the Indigenous People of Biafra.  Recall that The federal government had proscribed the organisation led by Nnamdi Kanu as terrorist’s Group

Though Kanu fled Nigeria after he was granted bail the courts, he still commands a cult followership in Nigerians Eastern part of the Country.  A Quick survey from across all social media groups shows that a number of other Igbo people across Nigeria and abroad believe in his agitation for Biafra. but not necessarily the way it is managed by the Mazi NNAMDI KANU group. 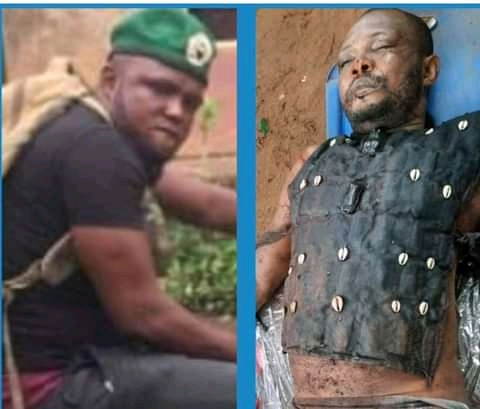 The security team also recovered the remains of Ikonso Commander and the six of his fighters. Several sophisticated weapons including six AK47 rifles, hundreds of ammunition of different caliber and lots of charms including bullet Proof charms were recovered from them

A Face booker – Emeka Chukwudi wrote- ” DON IKONSO was a well known hardcore IPOB member before he joined ESN and emerged a commander. He was killed on Saturday 24th April 2021 when he surfaced at Umuoma alongside other ESN to defend the land from Herdsmen invaders. He was allegedly ambushed and killed after the same Igbos he was fighting for gave out his details to the security forces. Ikonso was betrayed by his own people.”

IPOB Blames Gov. Uzodinma For The Death Of Its Commander, 6 Others, Vows To Retaliate

Anambra State Pushes To Be Recognized As The...

Why Is African Finance Summit Holding In Paris...