Security operatives in Nigeria says it has arrested one Okafor who has been on security surveillance over allegations that linked him (Okafor) to the activities of the hoodlums, killings and burning police stations in the state. It was also gathered that the suspect, until his arrest was one of the director of Pecubel hotel in Imo  and has a pharmaceutical outlet in Lagos. The security operatives says  sponsors of the hoodlums who operated under the name “unknown gunmen” a 42-year-old man, one Nnamdi Okafor, and that one of the ring leaders’ name was given as Izuchukwu Ohaeri, aged 31 years, from Isiwenke, Amakohia in Ihitte Uboma local government area of Imo state. 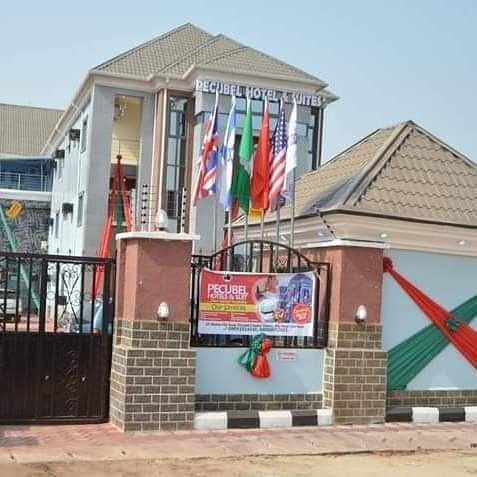 An investigation by Vanguard yesterday revealed that one of the said sponsors of the hoodlums who operated under the name “unknown gunmen” has been arrested by security operatives for allegedly sponsoring the “unknown gunmen” linked to the killings, burning of Police stations in the state as well as the Owerri correctional centre.
Vanguard in Owerri was told that he was nabbed at Aboha-Ohi around lifeline Assembly Owerri/Orlu road in Imo state. Furthermore, he has been on security surveillance over the said allegations that linked him to the activities of the hoodlums, killings and burning police stations in the state. “He is from Amanachi community in Orsu local government area of Imo state, he was arrested in April, around lifeline Assembly in Aboha-Ohi along Owerri /Orlu road in Imo.

How this small man is sponsoring Boko Haram, Bandit, Hoodlums, Unknown Gunmen, Fulani herdsmen, ESN, is what HQ Nigerian Army and even Garba Shehu has not told us? Is God not wonderful? when will Hope Uzodimma stop hunting his perceived enemies and make peace with his people before it is too late? we suspect that this man is also the one sponsoring attacks in the north and Benue state? Please our security operatives should check very well.
However At today’s church service held at the Victory Chapel, Imo State Government House, Owerri, Governor Hope Uzodinma said ‘I had the opportunity to address some issues pertinent to the safety of our lives and properties as Imolites amidst the prevailing insecurity.
I disclosed that security agencies have identified those behind the recent disturbances in the state. In the next few days, their identities would be unveiled alongside their actions so that they can face justice squarely.

I assured that our administration would use all within its powers to identify and flush out criminals in Imo and in doing that, we will never negotiate with criminals. I used the avenue to warn anyone involved in any form of criminality aimed at bringing down Imo State by any means to have a rethink or such persons will have themselves to blame. Those out to bring the state down must be prepared to be brought down as well, I maintained.

I appreciate Imo residents for their understanding and resilience throughout the period of security breaches and skirmishes. The mayhem in Imo State was carried out by hoodlums, bandits, a section of IPOB members and aggrieved politicians who have decided to sponsor violence to derail the Government of the day but we are determined to overcome them all.
-Hope Uzodimma
0 comment
0
FacebookTwitterLinkedinWhatsappTelegramEmail
previous post

Celebrating The Man Who Makes Things Happens For Others: Ogene Igbo @ 50

First in History! Another Esau Plays With His...

1Month After Flood Sacked Some Communities...

Tornadoes Ripped Through US Central City...

Civil Rights Council Is Appealing To...