Anambra State, Commissioner of Police CP Christopher Owolabi has set the ball rolling as he announced his assumption of office with a media chat with journalists in the state following the redeployment of the former CP Bala Kuryas, making him the thirtieth commissioner of police that have served in the state.

The new Commissioner CP Adetokumbo Christopher Owolabi* was born 29th May, 1964 in London, United Kingdom; and hails from the small but renowned Ogiri-Magonog Community in Kogi State. He attended Ireti Primary School, Ikoyi, Lagos and proceeded to Mount Carmel College, Ilorin for his secondary school education. He obtained a bachelor of science (BSC) degree in Political science from the prestigious Ahmadu Bello university, Zaria in 1985 and masters degree in international police science from the university of Portsmouth, United Kingdom in 2004 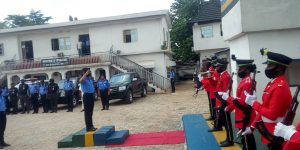 On his arrival yesterday, at the Police Headquarters Awka, he was welcomed by an official parade after which he met with various ranks of officers who saluted the new commissioner of Police with parade displayed by men of the police force. CP Owolabi, during the media chat, assured people of the state of the commands preparedness to combating crime and restoring serenity to the once peaceful Anambra state.

In the course of his service, he has been privileged to serve in the United Nations & African Union Peacekeeping missions in Rwanda, (1994), Liberia (2004) and Sudan (2006). He is married with Children
*DSP Ikenga Tochukwu Anipr, PPRO Anambra State Police Command
0 comment
0
FacebookTwitterLinkedinWhatsappTelegramEmail
previous post

Less Than 48 Hours After The Launch Of Operation Search And Flush, Soldiers Lock Horns In Exchange Of Fire With Unknown Gunmen In Imo State, 8 Killed

Nigeria Community In Malaysia Is Seeking...

Woman kills Husband, Father Of Her...

Another Round Of Recession Is Here!!!...