The Nigeria Police Force has ordered immediate withdrawal of personnel attached to governors, senators, other public office holders and VIPs in the South East over nonstop attacks on police officers and formations in the region.

The directive was contained in a police wireless message shared by The Whistler with The signal dated “101054/05/2021” and with reference number 0900/DTS/DOPS/VOL47/812 was issued by the Commissioner of Police (DOPS), Asaba, Delta State. 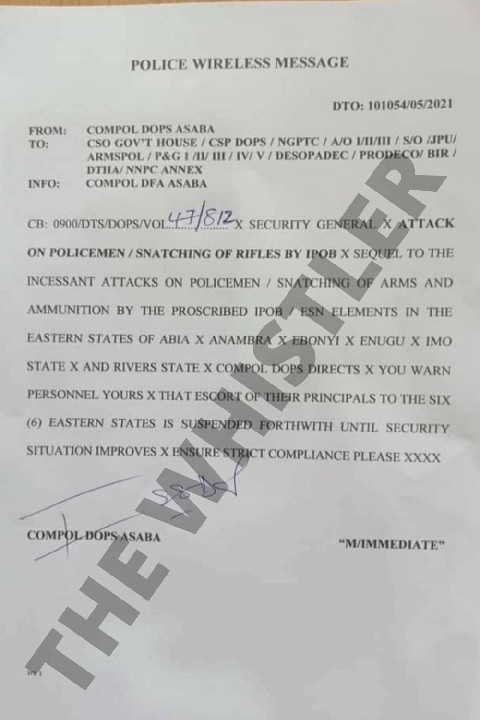 This is Coming from the Commissioner of Police (DOPS), Asaba, Delta State Command, the wireless message said the directive followed attacks on policemen by alleged members of the proscribed Indigenous People of Biafra (IPOB) and its the Eastern Security Network (ESN) paramilitary wing.
Sequel to the incessant attacks on policemen/snatching of arms and ammunition by the proscribed IPOB/ESN elements in the eastern states of Abia, Anambra, Ebonyi, Enugu and Imo States and Rivers State, COMPOL DOPS directs you warn personnel that escorts of their principals to the six (6) eastern states is suspended forthwith until security situation improves. Ensure strict compliance please,” it reads.The acting spokesperson of the state command, DSP Edafe Bright, confirmed validity of the wireless message, but noted that it was not meant for the press.

“Firstly, the message that was sent out is not for press, so I don’t know how it got to you,” Mr Bright said. “Secondly, it is for policemen attached to VIPS not to escort their men to any part of the eastern state. That is the directive.”

Frank Mba, police spokesperson, was not available for comments weather this was one of the new security measures approved by President Muhammadu Buhari after a security meeting with security chiefs at the Presidential Villa on Tuesday.

Photo News: “I Dedicate Myself To...