I commend Twitter for deleting President Muhammadu Buhari’s tweet threatening Civil War 2 on the Southeast of Nigeria. That was a most irresponsible tweet, and Nigerians are indeed grateful to Jack Dorsey for talking that action. But please do not stop there. Delete his account. He is a menace to the world. If you can delete Donald Trump’s account on the grounds that you suspected him of instigating the 2021 storming of the United States Capitol, then why still allow Buhari’s account to remain live on Twitter after he threatened to repeat a war that killed at least 1 million Biafrans, especially children and infants

A former governor of Ekiti state has slammed President Buhari after his tweet was removed from the platform following his statement about the civil war.

Buhari on Tuesday June 1, via his Twitter handle said those who are too young to understand what occurred during the civil war will soon be treated in a ‘language they will understand’ 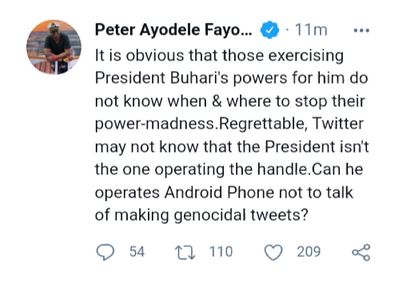 Reno Omokri, Also applauded Twitter for deleting President Buhari’s tweet where he made reference to the 1966 Civil war.

The Many Sins Of Muhammadu Sanusi:...