Friday, December 3 2021
Home NewsSecurityCrime Nigeria Will End As An Entity, If Bandits Are Declared As Terrorist- Gumi Warns
CrimeNewsSecurity

Nigeria Will End As An Entity, If Bandits Are Declared As Terrorist- Gumi Warns

Islamic Cleric Sheikh Ahmad Gumi on Sunday warned that declaring bandits as terrorists will mark the end of Nigeria as a sovereign and united entity.

The Cleric who is retired army military officer and mufti, admitted that the devastation inflicted by rampaging bandits in Nigeria’s northwest amounts to terrorism, but President Muhammadu Buhari’s labelling them as such will invite additional consequences that will consume the entire country 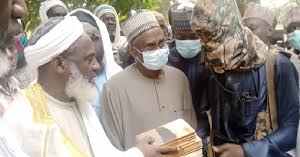 “The acts the bandits are committing now in North West have gradually over time become tantamount to terrorism because wherever innocent people are fatal victims it’s pure terrorism,”  Gumi said in a Facebook post on Sunday night.

The cleric warned that the moment bandits are designated as terrorists, “Islamic for that matter, the direct foreign Jihadist movements will set in in force.”

I Have Never Collected Any Fees...