Niger Delta Women Women under the aegis of Wailing Women of the Niger Delta(WWND) have barricaded the entrance of the Niger Delta Development Commission (NDDC) Headquarters at Eastern By-pass in Port Harcourt, Rivers State, protesting against Federal Government’s delay to publish the forensic audit report and to constitute a Substantive Board of the Commission.

The protesting women, yesterday, carried placards with various inscriptions of ‘no more one-man show,’ ‘Minister we need a board,’ demanded the immediate dissolvement of the interim management committee of the NDDC and women’s inclusion in an eventual constituted substantive board.

The coordinator of the group, Barr. Adienbo Odighonu, who expressed her dissatisfaction to newsmen, disclosed that the women, drawn from all corners of the region had decided to speak up where the men chose to play politic with the commonwealth of the region.

In her demands, she called for the immediate sack of the NDDC’s Sole Administrator, noting that his continuous stay in office contravenes the Act that set up the NDDC, adding that the audit report should be published and a substantive board should be constituted with women being on the board. 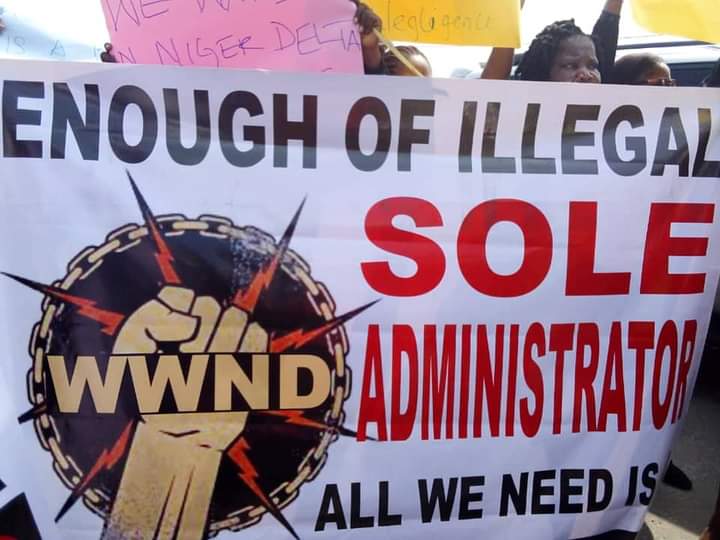 She threatened to go clad in subsequent protests, disclosing that they will not back down on their demands until practical steps are taken to address their issues.

She said: “I am here because Akpabio thinks that he has compromised and bought over, and given money to all the people of Niger Delta.

The NDDC Acts states there is nothing like interim administration that they should constitute a board to bring development to our grassroots.

“I come from the grassroots, I know what our men, women, and children are passing through.

“We the women are here to change the narrative. We are here to tell the people of Nigeria, that Akpabio, Malami, and Buhari to constitute the board.

“We are here to tell them to bring to the public the forensic report and when constituting the board that women should be well and properly incorporated into the board.

“We are here to tell them that the illegal sole administrator should be dissolved, and if they do not listen to our calls, we promise them that we are going to protest naked women. This is just the beginning.

Another protester, Loveth Timothy, said, “We want the NDDC board to be constituted. The forensic audit report is to be made public.

“Our men have failed us we want to do what they have not been able to do.

“They have asked for some of us to come in for discussion we are not ready to cash out. We are here for the right thing to be done.”

The Assistant Commissioner of Police in charge of Operations in the state, Udu Ogechi, who was on the ground to receive the women’s protest letter, urged the women to be calm while assuring them that their demands will be channeled to the authorities.
“I am in charge of operations in this command. So, I have come to know your anger, need, and request. I am going to take them to the authorities and I am assuring you that they will be resolved.#

2021 World Entrepreneurship Day: Educationist Insist Entrepreneurial Aspect Of All Course Should Be Taught In Universities

CCTV Revealed How The South African...