Nigerian Vice  President Yemi Osinbajo is set to formally declare his 2023 presidential aspirations on Monday through a video message,
Following the declaration, a round of rallies around the country would be held to mobilize support for the vice-president, a senior political operative working on the project disclosed.

Ahead of the formal declaration, the Vice President was on Sunday locked in a meeting with some All Progressives Congress, APC governors at his official residence, Akinola Aguda House, Presidential Villa, Abuja.

As at 6:45 pm, sources said that not less than six governors, including the Kaduna State governor, Mallam Nasir el-Rufa’i, and his Ogun State counterpart, Dapo Abiodun, were already within the premises 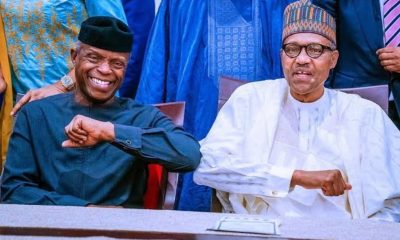 Other APC governors seen being driven in before the 7pm scheduled time for the gathering included those of Hope Uzodinma of Imo; Babajide Sanwo-Olu of Lagos and Gboyega Oyetola of Osun.

The meeting, which seemed exclusive to only the invited governors and some of their aides, did not admit journalists in the premises of the Vice President’s residence.

Efforts to get the roll call of the governors who had entered before 6:15 pm were unsuccessful as neither the spokesman of the Vice President, Mr Laolu Akande, nor any of the security personnel at the gates would volunteer information on the APC governors present or on the plans for Osinbajo to declare for the 2023 flag of the APC.

A political operative working for the Vice President said late on Sunday that the Osinbajo would declare his 2023 intentions on Monday by video.

He said: “I have just confirmed that the VP will release a recorded video tomorrow morning in which he’d declare his intention to run for President in 2023.

“Thereafter, there would be rallies in many cities and towns across the country.”

It was learnt that as many as 12 of the 22 governors in the APC were presently working for his emergence.

ICPC Uncovers N1.85 Billion From A House And...