A young woman, who absconded after setting her husband, Cairo-based businessman, Bioluwatife Bamidele, ablaze in Osogbo, Osun State has died.

The elder brother of the husband, Olabode Bamidele, disclosed that the young woman committed suicide, adding that her corpse has been deposited at Jalayemi Hospital. He added that the woman left some notes, but with the lawyer as of the time of filing this report.

The  jealous woman simply identified as Ifeoluwa Akanji, allegedly set her husband, Bolu Bamidele ablaze over alleged infidelity in the

According to media reports, before the unfortunate event which occurred on Sunday, July 17, 2022, Bamidele and Ifeoluwa had had a marriage engagement in March 2022 before he travelled to Cairo, Egypt, where he is based. A source close to the deceased claimed that Bamidele built a bungalow for Ifeoluwa in Osogbo and bought her a car adding that trouble started when Bamidele returned to Nigeria to celebrate Ifeoluwa’s birthday last week and Ife discovered while going through his phone, that he had impregnated another woman.

The Osun State Police Command had earlier declared the young woman wanted for the alleged crime. 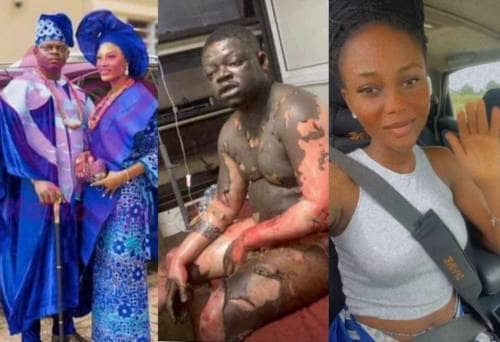 The woman had set her husband ablaze over alleged infidelity on Monday, July 18.A credible source disclosed that “Teebam returned from Cairo to surprise his wife on her birthday. She discovered that he had cheated on her and even had a child outside their union. She confronted him with the information and an argument ensued.

“Ife proceeded to incinerate Teebam’s phones before setting him ablaze in their house in Osogbo, Osun State. He was rushed to the hospital where he later died on Tuesday. “Ife, who left a cryptic post on her WhatsApp status, wrote, “I’ve always been a calm girl and I have never done this in my life but Teebam has pushed me to the edge. At this point, y’all will weep over myself and him before daybreak. I’m promising y’all that.”

Passengers Groans As AERO And DANA Airlines Painfully Disappear From…

Panic In Wike’s Camp As Atiku Abubakar Divide Rivers PDP, Set Up Committee To Receive Him In…