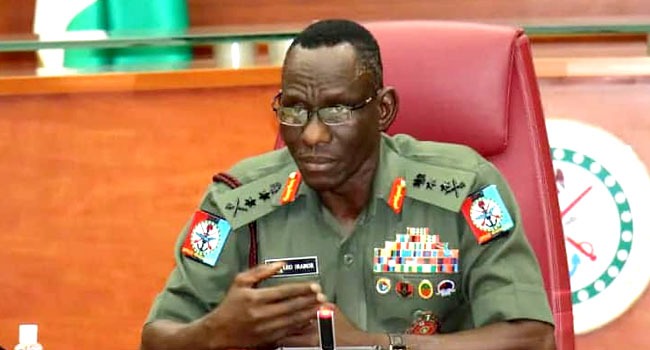 The Defence Headquarters of Nigeria military has said the report by an international news agency, Reuters that Nigeria Army carried out forced abortion on women and girls personnel was evil and untrue.

Defence Headquarters said Reuters Nigerian peoples and cultures cherished lives, stating personnel of the Nigeria military could not have contemplated carrying out such evil against children.

In a press statement signed and released by the Director Defence Information, Defence Headquarters Major General Jimmy Akpor, the Nigeria military asked Reuter to starts to regret the demonic journalism being practiced by the journalists that he left behind!”

“The Reuters report was to also allege that, since 2013, Nigeria’s military had run a secret, systematic and illegal abortion programme in the country’s North East terminating at least 12,000 pregnancies among women and girls. That, many children were shot, poisoned, suffocated or run down by vehicles in army-led actions.

“Furthermore, the report was to allege that soldiers selected babies and toddlers for killing after rescuing them and their mothers from Islamist militants, amongst other weighty concocted allegations. The key motive for supposedly carrying out the abortions was allegedly the notion that the children of Islamist militants, because of the blood in their veins, would one day follow in their father’s footsteps and take up arm against the Nigerian Government and society.

“Hmmm! Wickedness really runs in the veins of some people and it surely runs deep in the veins
of the Reuters team that concocted such evil for interrogation.”

See also  Re-Introduction Of History In Basic Education Curriculum Is To What Benefits?

The statement continued: “The fictitious series of stories actually constitute a body of insults on the Nigerian peoples and culture for, no people or culture in Nigeria practices such evil as dreamt up by the Reuters team.

“Irrespective of the security challenges we face as a nation, Nigerian peoples and cultures still cherish life. Hence, Nigerian military personnel have been raised, bred and further trained to protect lives, even at their own risk especially, when it concerns the lives of children, women and the elderly. This much is reflected in Standing Operating Procedures (SOPs), Concepts of Operations, Rules of Engagements (ROEs) and other documents that guide military operations.

“Hence, nowhere has the Nigerian military operated (Congo, Liberia, Sierra Leone, Somalia, Rwanda, Yugoslavia, [Darfur] Sudan, Gambia and Guinea Bissau, amongst others) that, there has been any trace or allegation of infanticide. The Nigerian military will not therefore, contemplate such evil of running a systematic and illegal abortion programme anywhere and anytime, and surely not on our own soil.

“The Nigerian military will not also deliberately plan to target children during its counterinsurgency operations or other operations, both within and outside Nigeria.

“The Reuters team must have been schooled in, and have now become proponents of scorched-earth and inhuman policies employed by colonialists during the colonial era and during the battles for independence in Indo-China, Malaysia, Algeria and other places. Villages and crops were burnt.

“Children, women, elderly, the innocent were killed in systematic and inhuman programmes. Nigerians, and by extension Nigerian military, are not made in such wicked mould, and the Reuters team cannot appropriate the evil of infanticide to the Armed Forces of Nigeria and the Nigerian peoples.

“But, let’s interrogate the issues. It took Reuters 13 solid years to craft an allegation of infanticide against the Nigerian military and the Nigerian nation. This shows that a news agency as ‘renown’ as Reuters is itself complicit for failing in its mandate to draw attention, to inform the publics about supposed occurrences that offend not only the laws of armed conflict but also international humanitarian law.

“The Borno State Government is camping and accommodating them family-by-family, as per households, without having to separate the children from their parents. In the same camp are thousands of pregnant women and nursing mothers.

“A total of 262 babies were born within a period of 4 months (94 in July, 98 in August, 60 in September and 11 in October 2022). This figure comprises 150 female and 112 male children. The children were neither aborted nor yanked from their mothers and killed, as may have been the joy of Reuters.

“Troops also rescued Kauna Luka with her child and Hanatu Musa with her 2 children in July 2022. In the same vein, Aisha Grema with her 4-year-old child and Falmata Lawal were rescued in August 2022.

“Furthermore, Asabe Ali with her child, Jinkai Yama with her 3 children, Yana Pogu with her 4 children and Rejoice Senki with her 2 children were rescued in September and November this year. The names of the rescued girls are in Serials 18, 46, 41, 38, 7, 11, 3, 12, 20, 19 and 70 respectively (in the order of rescue) in the list of the abducted Chibok School girls.

“The rescued girls were handed over to the Borno State government after their rescue. A visit to the Rehabilitation Centre accommodating the Chibok girls on 29 November 2022 revealed that there were 2 other Chibok girls (with their children) rescued earlier, making the number of the Chibok girls in the Centre to be 13. Other residents in the facility were children who were rescued by troops unaccompanied (by any adult) or who separated from their parents/relatives due to fog of war.

“If there was any evil, illegal programme to systematically kill the children of Boko Haram terrorists, then the children that the terrorists begat through the Chibok girls would have been prime targets.

APC Dismisses Rumour Of Court Judgement Against Its…

27 Dead Bodies Believed To Be People Who…