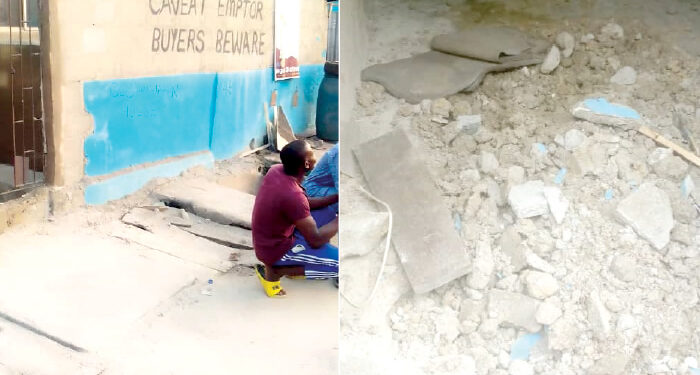 A 47 Years old businessman, Dapo Olofinmakin, has accused his mother, Olufunmilayo, of exhuming the corpse of his late father, Segun, in a bid to sell his property on Sanya Street in the Aguda area of Lagos State, where he was buried.

It was learnt  that Dapo, , had opposed the plan by his mother to move the body to another location to facilitate the sale of the building.

In a bid to achieve her aim, Dapo, while speaking to our correspondent, alleged that his mother mobilized policemen from the Zone 2 Police Command, Onikan, to arrest him at his father’s house.

He noted that the policemen, who arrested him and his daughter around 7.30am on October 30, 2021, detained them for 13 hours, adding that when they returned home, his father’s remains had been removed.

Dapo said, “I am the only child of my mother and father; sometime between 1982 and 1995, my father was not around to manage his property because he had some challenges. During this period, my mother got married to one Alhaji Onisemo, who is now late, and she gave birth to my stepsister, Bukola. “I was in South Africa when my father died and could not return home to bury him because of the travel restrictions caused by the COVID-19 pandemic. So, it was my uncle, Olu Akomolafe, who is my mother’s brother, and members of the Sanya Street Landlord Association that buried my father.

“When I returned from South Africa, my mother started claiming she owned my father’s house. While my mother, a family member and I were at loggerheads over claims to the property, on October 28, 2021, she came with policemen around 7.30 am to arrest me at my father’s house.

“They took me to the Zone 2 Police Command, Onikan, where I was detained till they exhumed my father’s corpse on that same day. I was later released around 8pm. As I speak to you, I don’t know where she buried my father’s corpse or what she did with the corpse. She did all these things because she wanted to sell that house and I refused.”

Dapo stated that some tenants in the house saw his mother removing the body from the grave.

The Ondo State indigene, who stressed that his mother was claiming his father’s house despite leaving him a long time ago and remarrying, urged relevant authorities to intervene in the matter. Contacted for a reaction, Olufunmilayo, who insisted that she built the house, said a lawyer would get in touch with our correspondent.

“That boy is a liar. I built that house and he’s here laying claims to what is not his property; my lawyer will contact you later,” she said.

When the lawyer did not reach out,  the woman was called to inform her and demand his contact., but the lawyer’s phone number rang out twice without a response. He also failed to reply to a text message from our correspondent as of press time.

Our correspondent further reached out to Olufunmilayo to inform her of the refusal of her lawyer to respond, adding that it constituted a waiver of her rights to react to the allegations. She did not respond to the text message.

Dapo’s uncle, Olu, who is a sibling of Olufunmilayo, said the deceased was the owner of the property.

He said, “I am a pastor and I will not tell lies. Late Segun, my in-law, owned that house legally and it is now his son’s. My sister left (Segun) and remarried in 1982 and she had children with the other man and when my in-law died in 2020, she did not even attend his burial.  “I and members of the Sanya Street Landlord Association, Aguda, buried Dapo’s father because he was not in the country when his father died. I was surprised when I heard that my sister had gone to exhume his corpse and she is claiming the house, which is not hers.”

The Chairman of Sanya Street Landlord Association, Olu Francis, also said the property was built by the late Segun.

He said, “Olufunmilayo’s younger brother, Olu, who is a pastor, and members of our association, buried Segun at his house when he died. I was surprised to hear that the woman exhumed the corpse and is now claiming the house. Dapo is the only child that the man (Segun) had before he passed.”

The property developer, Wale Ojeyemi, said he was in possession of one of the house documents, adding that it was in the name of Dapo’s father.

When contacted for a reaction, the Zonal Police Public Relations Officer, DSP Hauwa Idris, said she could not react until she checked the records. She said, “There is no police reaction to this matter until I am able to get details of the case.”