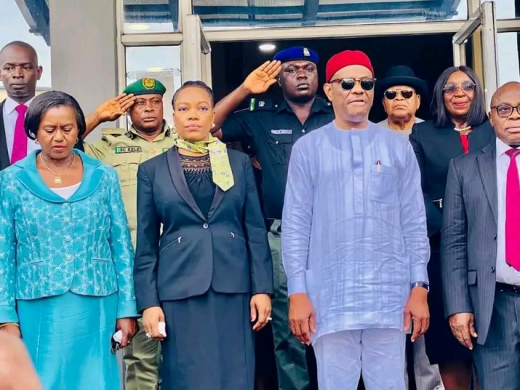 Governor of Rivers State, Nyesom Wike has launched the first technology-driven Family Court in Nigeria. His wife, Hon. Justice Eberechi Suzzette Nyesom-Wike is the Court’s president. The governor urged litigants to explore use of alternative prosecutor to accelerate cases disposal.

Wike also unveiled the “Family Court Rules, the Guide,” and the book is titled “The Child, Ethics and the Law: A Simplified Law Guide for Children and Young Persons. ”Governor Wike noted that often, prosecutors clandestinely withdraw prosecution of child’s rights abuse cases, which frustrate the case, and justice to the child denied.
To forestall such situation, he urged the judiciary to do everything possible to achieve the essence of establishing the Family Court, which is to engender a child friendly justice system that treat children with dignity and fairness.

“As usual, nobody knows what may happen, but is there no way the legislature could say that in case the prosecutor is not coming for a case, the court, when I say the court, I am not talking about the presiding judge, but the judiciary, could on their own by funds available, hire another prosecutor(s) so that these cases do not die.”

Governor Wike spoke of hindsight of experience of what often transpires and why prosecutors discontinue such cases of abuse of children. The governor stated that children suffer a great deal of defilement at early age, but the lack of interest of prosecution to pursue such cases to logical conclusion serve as another form of injustice to children.

“Children, they suffer, most of them are defiled at their early ages. Some people (lawyers) cannot stand firm to say that, look, I will not accept this, that I must prosecute the matter to the last to see that there is justice.”

Governor Wike pledged his support to what the Family Court truly represents even if its establishment is coming about 13 years after the
State Assembly first domesticated the Child’s Rights Act in 2009.He advised against the attitude of giving excuses which could hamper the operations of the court now that the state has joined the league of States that have Family Court.

“Frankly speaking, I am fully in support and I have to thank God. Students and pupils are here to see that every hope is not lost. You have an opportunity to see that justice is being done and I believe that with the presiding judge and his colleagues that will be working in the Family Court, they will make sure that justice is not only done but will be seen to have been done.

”In her speech, the presiding judge of the Family Court, Hon. Justice Suzzette Eberechi Nyesom-Wike explained that the essence of child-friendly justice is to re-orientate and rehabilitate the child.

The court, she said, will also reintegrate; bring relief and redress to the child, and not inflict corporal punishment or hardship on the child, no matter the delinquency.

“Under this system, the Court is obliged to listen to children, consider their views and ensure their participation and protection in the process, whether as victims, witnesses or offenders.”

Justice Nyesom-Wike spoke further saying that since joining the bench in 2012, she had desired to ensure that there was a justice system, which guarantees the effective implementation of all children’s rights at the highest attainable level.

However, she noted that the journey to what has been actualized today did not start until two years ago, despite the domestication of the Child’s Rights Act by the Rivers State House of Assembly in 2009.

“Apart from the lack of political will, the Rivers State Child’s Rights Law of 2009 was fundamentally defective and incapable of triggering the jurisdictional competence of a Family Court in the State, even if the State had wanted to establish such a Court.

“Additionally, the textual errors, omissions and repetitions in the Rivers State Child’s Rights Law 2009 were so severe that the 2021 amendment could not cure and resolve the legal stalemate. “Besides this, after 13 years and with some changes occurring in our justice system in Rivers State, Nigeria and the world over, a review of the Law was necessary for the benefit of our children.”

See also  Bingham University Bans Use Of Smartphones, Says Students Can Use Laptop Instead

According to her, it is expected to spread to all the Local Government areas to ease access to justice across the State as the need arises and resources allow.

“The court will be age-appropriate, speedy, and diligent. It will also focus on the child’s needs, respect the right to due process and the right to private and family life. “It will also be accessible to all, including litigants, lawyers and non-lawyers who have the right to participate and personally conduct their cases in the court. ”In his address, Chief Judge of Rivers State, Justice Simeon Amadi informed that the Rivers State judiciary has furnished and equipped a befitting place for use as Family Court. He said the judiciary is now set to commence an appropriate Family Court proceedings at the High Court and Magistrate Court levels in tackling designated cases.

On his part, the Attorney General of Rivers State and Commissioner for Justice, Prof. Zacchaeus Adangor lauded the establishment of the Family Court and said it is another reckonable feat in the administration of justice in Rivers State. Former president, Nigerian Bar Association (NBA), Onueze C.J. Okocha, SAN and chairman, NBA Port Harcourt branch, Victor Benibo delivered goodwill messages on behalf of Body of Benchers and NBA respectively.

Why, I Sell Most Of The…