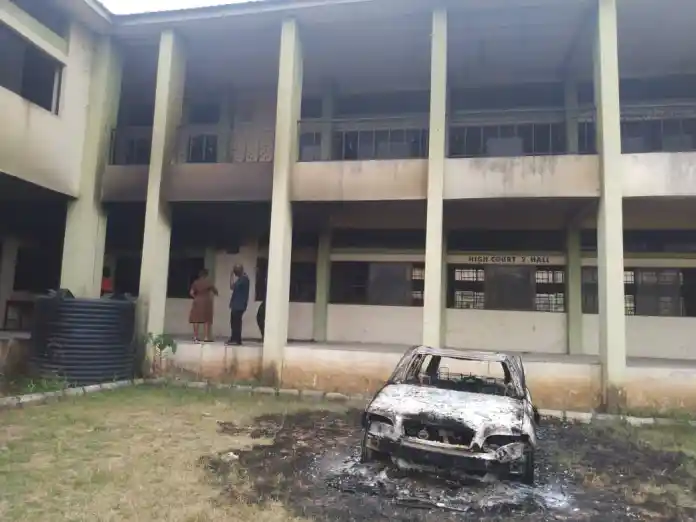 The Orlu High Court complex in Orlu Local Government Area of Imo State has been razed down by yet-to-be-identified persons.

This is happening a few days after the INEC headquarters in Owerri the capital of Imo State was attacked. , the complex housing both the Magistrate Court and the High Court as well as all the files got burnt. One of the Judiciary workers met at the scene that gave her name Mrs Igwe condemned the action pointing out that the incident automatically crippled legal practice in Orlu as the Lawyers would have no court to do their matters.

When contacted by the Nigerian Bar Association, Orlu branch, Barr. Barnabas Munonye also confirmed the incident to  in Owerri Saturday. He said that before the incident he received a call from the Registrar and the administrative secretary of NBA Orlu about the presence of unknown faces and unusual movement of people. Munonye said that at that time there was nothing they could do than to believe that nothing would happen.

He said that in the early hours of this morning, he received a call that the Orlu High Court has being burnt down.

The NBA chairman said that already they have made entries about the incident to the police for action.

Angry Father For Beats Daughter To Death For…