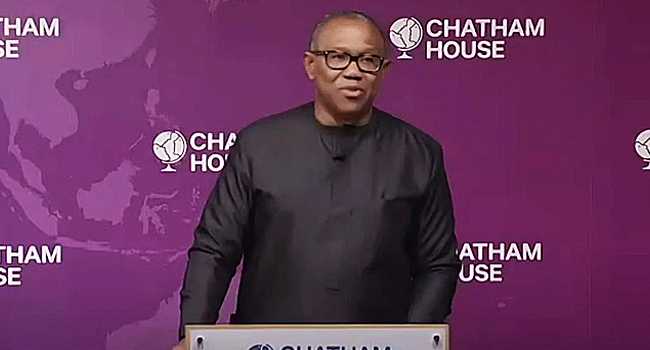 The presidential candidate of the Labour Party (LP), Peter Obi has vowed to dismantle the “structure” holding Nigeria captive and preventing the nation from advancement and progressive development.

Obi, a former governor of Anambra State spoke on Monday when he discussed his plans at a world-leading policy institute and think-tank forum, Chatham House in the United Kingdom.

According to the 61-year-old businessman, the “structure” currently in Nigeria is that of criminality and it has impoverished the West African country.

Obi said, “You have heard them say we don’t have structure; that is the structure we are trying to destroy – structure of criminality that Nigeria is being held captive; that structure is the structure that has impoverished Nigeria. We’ll dismantle it. It will not be there. I assure of you.”

The Chairman of the Independent National Electoral Commission (INEC) Mahmood Yakubu; and the flag bearer of the New Nigeria Peoples Party (NNPP), Rabiu Kwankwaso would also speak at Chatham House later in the week.

On December 5, 2022, Obi’s counterpart in the All Progressives Congress (APC), Bola Tinubu made an appearance at Chatham House in London, where he revealed some of his plans for major sectors like defense, economy, education, and technology.

Tinubu had also delegated some of his allies including serving governors and lawmakers to answer questions posed by participants at the event, one which attracted widespread criticisms.

Obi, Tinubu, Kwankwaso and Atiku Abubakar of the Peoples Democratic Party (PDP) are frontline candidates in the February 25, 2023 presidential race.