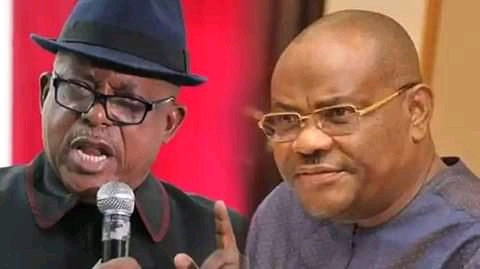 Another Shocker From Wike – Secondus Didn’t Finish Secondary School, He’s Not A Member Of PDP

Rivers State Governor, Nyesom Wike has told Uche Secondus, a former national chairman of the Peoples Democratic Party, PDP, that he is no longer a member of the party.

He also alleged that Secondus was flogged for alleged misdeeds by a former military administrator.

Wike was responding to Secondus’ claim that the Governor has no powers to impose a presidential candidate on Rivers electorate.

This was after the Governor had, during the week, said that by January 1, he would announce to Rivers people who they will vote for during the 2023 presidential election.

Wike described Secondus as a meddlesome interloper because he had been thrown out of the opposition party by his ward in Andoni.

The governor spoke at the inauguration of Aluu- Omagwa Link Road that held at Omuagubia play ground on Saturday.

“I read newspaper this morning where a former member of our party, one Uche Secondus said that no one man can impose a presidential candidate on Rivers people.

“He is not a member of our party. His ward expelled him from the party.

“Up until now, you are not a member of our party.”

Wike said he had told the former party leader that he was not going to conduct the party’s primaries for the 2023 elections and so it happened.

The Governor, however, said he has never at any occasion said he would impose a candidate on them but would only tell them his choise of presidential candidate at the right time.

“But don’t blame them, when you didn’t finish secondary school, you will not understand the grammar,” he added.

Awa Lokan’ (Our turn): Details Of…