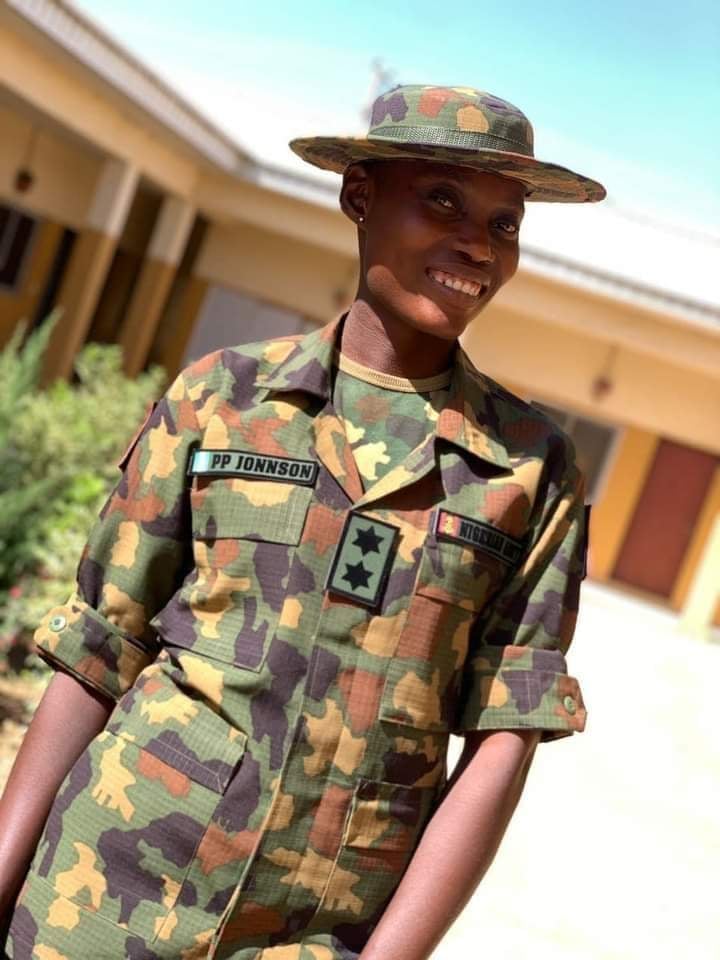 The Nigerian Army has rescued a female Lieutenant, P. P. Johnson abducted by gunmen terrorizing the South-Eastern part of the country.

A trending video showed the officer being tortured by the gunmen after she was abducted in her hometown, Ihube.

She was said to have travelled to her hometown for the Yuletide season.

“She was just conferred with the rank of Lieutenant in the Nigerian Army. She passed out on December 17 after being commissioned from the Direct Short Service Course,” a military source said.

“She was kidnapped at her home in Ibube. She travelled home for the Yuletide celebration.”

In the clip, one of the gunmen was heard threatening to kill the officer for being a member of the Nigerian Army.

He also warned youths against joining the military and other security agencies.

“This is a wonderful (sic) information for the whole of our people that are still in the military, that’s how all of you will be dying one after the other,” he was heard saying.

“Here it’s happening life in Enugu, today being 26th of December 2022, it’s happening live and direct, a Lieutenant, two star in military. We will fight against our enemies, for those of you that still remain in service, we will take you one after the other.

See also  'You Are A Bad Product, If Your Principal Does Not Recommend You'-Wike Mocks Atiku

“This is unknown gunmen. What we are after is Biafra, we have nothing to do with IPOB. Say bye-bye to your fellow soldiers, say bye-bye to this life.”

The officer was stripped naked and her hands and legs were tied. She was seated on the ground in a bushy area.

A military signal on Thursday revealed that the Lieutenant has been rescued.

The mastermind of the abduction was also arrested by the troops.

“At about 1420hrs on 29 Dec 22, security forces rescued Lt PP Johnson who was abducted by gunmen and taken to a forest bordering Enugu State and Ihube in Okigwe LGA Imo State on 26 Dec 22,” the signal read.

“The master minder (sic) of the kidnap has also been arrested by security forces while efforts are ongoing to arrest the others. The situation is still being monitored at the moment. but in another press statement Nigerian Army denied rescue or release of a Female Army Officer
Press Statement signed by the Director Army Public Relations, Brigadier–General ONYEMA NWACHUKWU released on its Official Twitter Page on Friday reads as Follows:

“ABDUCTED FEMALE OFFICER NOT YET RESCUED, SEARCH EFFORT STILL ONGOING
The attention of the Nigerian Army (NA) has been drawn to some publications circulating in the social media insinuating the rescue of Lieutenant PP Johnson, a female officer who was abducted on Monday 26 December 2022 while visiting her grandmother in Aku-Okigwe in Imo State, shortly after completion of her Cadet training and subsequent commissioning as a Lieutenant into the Nigerian Army. A video footage of her abduction had emerged in the social media where her abductors claimed her abduction was in line with their fight for Biafra against the Nigerian State. It is instructive that the officer’s circumstance as a woman and a Nigerian citizen of South Eastern extraction did not dissuade her abductors from dehumanizing her in their mindless attempt to commit atrocities under the guise of fighting for Biafra.
This evidently is another pointer to the myriads of crimes being unleashed by IPOB/ ESN on Ndigbo, the very people they claim to be fighting for their emancipation. It should therefore be crystal clear to those who are still in doubt of the true status of these groups, that IPOB/ESN are terrorists, masquerading as freedom fighters and do not deserve the support of anyone particularly the good people of South East Nigeria.
The NA wishes to state that the information making the rounds is unsubstantiated as the officer is yet to be released or rescued from her abductors. Likewise, the video footage being circulated and associated with the rescue claim is an old video of the arrest of a suspect earlier effected by troops.

Much as we appreciate the concern and goodwill of the general public for her safe rescue, we also wish to note that the information on the rescue of the officer did not emanate from the NA. The Nigerian Army will leave no stone unturned in its effort to rescue the officer and bring the perpetrators to book.
We appeal to the general public to provide credible and reliable information that could lead to her safe rescue and arrest of the perpetrators.”

“Support Us To Win Our States, We Will…