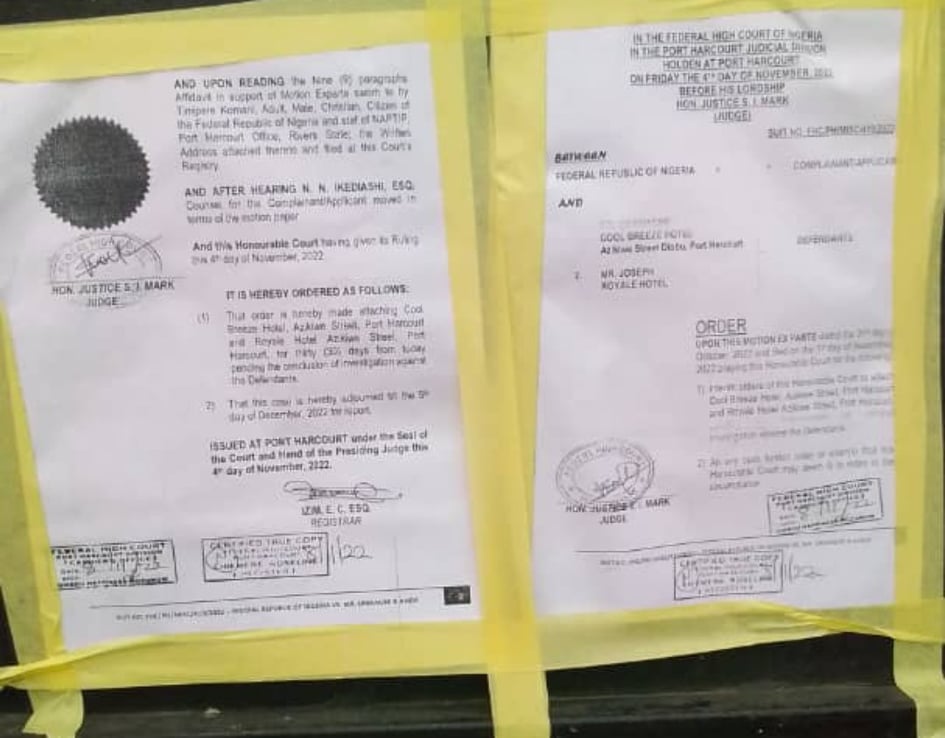 Our correspondent reports that all occupants were evicted before the brothels were sealed.

See also  Man Calls Off Wedding, Demands Bride Price Returns, After He Discovered Bride To Be Had 2 Secret Children

A court document cited by our reporter with suit no FHC/PH/MISC/419/2022 in Federal Government of Nigeria (Complaints) verses Cool breeze Hotel and ,Royale Hotel as defendants, the court directed that the hotels be sealed from November 4th,2022 for thirty days pending conclusion of investigations following an motion experte filed by NAPTIP.

See also  Nnamdi Kanu Refuses To Appear In Court, Over Refusal To Grant Him Bail

The case was adjourned till 5th December,2022 for report.

Recall that combined team of Nigeria Navy Ship(NNS) Pathfinder, NSCDC and NAPTIP had on the 29th October,2022 raided cool breeze and Royale brothels rescuing girls including underage girls who were forced into prostitution while
Some suspected traffickers were also arrested.

NAPTIP Commander in Rivers State, Nwamaka Ikediashi had told our reporter in an interview that suspects arrested will be arraigned in court upon completion of investigation

Full Identity Of DSS Lady Who Jumped Into…

Another Victim (Video)Forced To Renounce Support For Atiku…