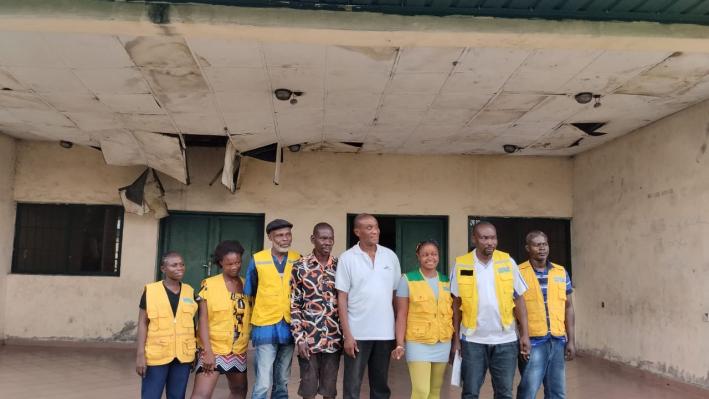 Community Reports: The Other Side Of Asari-Toru & Degema LGAs Basic Amenities- NGO Calls For Help

Centre for Human Rights, Health, Ethnic Harmony and Livelihood Development (CHHELD) a non-Governmental Organization funded by the British Councils, European Union Agents for Citizen Driven Transformation programme (EU-ACT) organized NEEDS Assessment in 4 communities in Rivers State to assess the vulnerability levels in their communities using the Participatory Vulnerability Analysis (PVA) and Participatory Research and Action (PRA) tools which unearthed certain critical NEEDS in Sama, Ido, Ipokuma and Obuama communities in ASARI-TORU and DEGEMA LGAs respectively. CHHELDs staff and the leadership of the Advocates for Local Government Accountability and Transparency (ALAT) teams, a group of community persons trained on LGA administrative and budgetary processes by CHHELD with support from the British Councils EU-ACT program carried out a visual confirmation and verification of these vulnerabilities in the 4 targeted communities.

Upon inspection of public toilets in the community, it was evident that members of the community use hanging toilets built over the water across various locations. The toilets were in a deplorable state, lacked roof, doors and even access way. The toilet contributes to pollution in the environment, for users dump their waste in the river and along the path to the toilet. This is also a harmful practice that is detrimental to the health of residents in the community.

The councilor of ward 11, Degema LGA, Hon. Idaeresin Garrick during an interview stated that the reason local government has been unable to provide public toilet is because of the unavailability of funds and the local government has a timeframe for the provisions of essential amenities across various communities. He further stated that if the funds are available, these amenities will be provided for the community and the local government is willing to partner with other well meaning organizations to provide these amenities. The community he said is ready to provide lands where modern public toilets can be sited and waste will not be dumped in the water. The men and women in the community made a commitment to maintain the public toilets when the government or any other organization sites the project in their community.

Sama Community (Asari-toru LGA, Rivers State)
One of the vulnerabilities of Sama community was the deplorable state of the State Primary School sited in the community. The school was built and commissioned by the previous administration of Rivers State in the year 2012. The school was built in the best standard with functional facilities such as library, computer lab, over 300 seater conference hall, play ground, etc, but vandalism, lack of maintenance, negligence by the local and state government has led to the school being in a dilapidated state.

The delegation of CHHELD and the Sama ALAT team on arriving the school noticed that the gate of the school was damaged and there was no signboard.
On a tour round the school, the following was noticed:
The roof was damaged
There was no water supply in the school
Damaged toilet systems
Lack of desks and chairs.
Damaged facilities in the library, computer room, etc
Roof leakage in the conference room which has led to damage to the chairs and other equipment.

Ido community (Asari-toru LGA)
Ido community in Asari-toru LGA in her NEEDS assessment stated that the most pressing need of the community is the fencing of the Community Secondary School, Ido. The school which is along the express road leading to other communities in Asari-toru LGA has been faced with various problems resulting from the lack of fence. One of the notable problem which arose was the assault by fire of the members of the National Youth Service Corp (NYSC) in the year 2013 which led to the death of a corper and injury to others. The lack of fence pose as a security threat to the lives of teachers and students. Also, it contributes to truancy and distraction of the students, which affects their academic performance. Community Secondary School Ido also lacks good and functional toilets, students in the school leave the school, cross the busy expressway down to other part in the community in order to use a toilet, others indulge in open defecation of waste around the school premises. Community secondary school, Ido have water facilities, however due to lack of electricity, the school is unable to have water supply.

The principal of the junior section, Mr. Taribo Monima stated that the lack of fence has led to robbery in the school where properties were stolen. He also showed the delegation of CHHELD a classroom project executed by the European Union (Project: Niger Delta Support Programme: Micro projects component in Nine Niger Delta States in Nigeria) in partnership with Ido community and the Asari-toru LGA. However, the project is not in use due to the local government not meeting up to their end of the partnership agreement by electrifying, tiling and furnishing of the classroom. Chief P.S Gillis, Ido community secretary appreciated CHHELD and laid more emphasis on the need to fence the school in order to curb cult related activities in and around the school. He stated that the community have made several efforts to reach the state, local government and the school’s board to come to the aid of the community, but the efforts have not been crowned with success due bureaucratic bottle necks and lack of funds.

Ido community is also faced with other vulnerabilities such as provision of electricity prepaid metered to Ido households, human capital development (i.e, provision of 21st century employability skills which include grants/loans for SMES, software development/digital marketing, rigging, seamanship, deep sea diving, pipe-fitting, animation, data management etc.), medical equipment and Personnel for the health centre in Ido and provision of pipe borne water to the sand field area of the community

During the visual confirmation in Obuama community, the delegation of CHHELD and the Obuama ALAT team went round the community to see the state of the public toilets and market. The traders in the Obuama market which is sited at the community town square stated that the market is not of a good standard which affects their finances. The residents in the community result in traveling outside to other communities and the state capital to purchase goods and food items. The lack of lock-up shops causes inconvenience to the traders for they pack and unpack their stocks on a daily basis and some of their good can be damaged during the rainy season. However, a construction of lock-up shops will be of great benefit to them and raise much needed funds for the community.

The delegation of CHHELD also went to the riverside where some hanging toilets are sited in the community. The public toilets were in a dilapidated state and the toilets being sited by the riverside contributes to pollution of the environment. It was also observed that refuse is dumped along the river banks close to the dilapidated toilets. There is also a need for solar lights by the waterfronts that will ensure security of lives and properties at night. Lack of light leads to various criminal activities been perpetrated along the waterfronts at night.

Sir Hon Daobu Harvest Harry the Secretary of the community, who took CHHELD delegation around the community stated that these developmental projects will improve the lives of residents in the community. He also gave an assurance of the community’s support to the local government or any other organization that intends to come to the aid of Obuama community.

Conclusion:
CHHELD through its Executive Director, Comrade Dandyson Harry Dandyson calls on the government at the local, state and federal level, international organizations, Organized Private Sector on Water Sanitation and Hygiene (OPSWASH), World Toilet Organization (WTO), corporate bodies and key stakeholders to use the occasion of the World Toilet Summit billed to hold in Abuja, Nigeria in November 18th and 19th 2022 to come to the aid of these communities by providing modern public toilets that will reduce the level of open defecation and pollution of their rivers.

CHHELD is also calling on relevant stakeholders to come to the aid of these communities in areas such as: Human capital development (provision of 21st century employability skills which include grants/loans for SMES, software development/digital marketing, rigging, seamanship, deep sea diving, pipe-fitting, animation, data management, etc). Installation of solar lights on the streets and waterfronts to drastically reduce blackout in order to discourage criminality at night. (i.e bunkering activities, sea piracy, smuggling activities, etc). Rehabilitation/construction of internal drainages in the Ipokuma and Obuama community to reduce flooding. Fencing of Ido community school that will enhance security of properties the lives of students, corpers and teachers. Provision of pipe borne water to the sandfield area of Ido community.
The NGO whose thematic areas include Human Rights, Healthcare, Democracy and Rule of Law, Ethic/religious Harmony, Poverty alleviation and Livelihood development is willing to partner with well meaning individuals, the government, international organizations and corporate bodies in bringing about these development in these targeted communities and others.

“PDP Chairman Sent Thugs To Attack Me And…