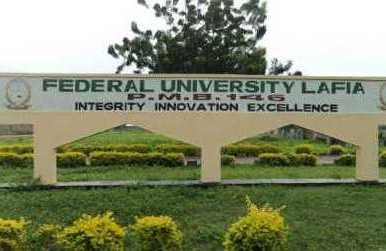 The Federal University Lafia, (FULafia) in Nasarawa state has debunked as fake news reports that one of its male undergraduate students has impregnated his female…

,,,,,The Federal University Lafia, (FULafia) in Nasarawa state has debunked as fake news reports that one of its male undergraduate students has impregnated his female lecturer. The Head, Information and Public Relations Department of the university, Abubakar Ibrahim debunked it in a statement on Wednesday. “The attention of the Management of Federal University of Lafia (FULafia) has been drawn to a story which has gone viral on the social media to the effect that one “Kelvin,” said to be a student of Computer Science Department of FULafia, has impregnated a lecturer of the department.

“This story cannot be further away from falsehood. Therefore, the management wishes to state categorically that the story is nothing but a fabrication by the writer, mischievous and aimed at destroying the good image and reputation of Federal University of Lafia because no such incident has happened in the university. .“The general public is hereby advised to disregard the purported story. The Management of Federal University of Lafia will continue to maintain high moral standard in the university,” he said.

Recall that a trending story online narrates that a  bachelor of computer science student simply identified as Kelvin from Federal university Lafia (Fulafia) has been expelled after successfully impregnating his lecturer.
The university disciplinary board is said to have received the disheartening news of the student impregnating his lecturer with acute shock, before deciding such a cruel penalty on him.

The student was summoned before the school’s disciplinary board where his expulsion letter was handed to him. He argued that the mistake was not entirely his but the board were not willing to accept his plea.
Kelvin clarified that the initial love advances was made by the lecturer, who ended up desperately pleading with him to have sexual affairs with her and even possibly impregnating her.

How the peculiar news went around the university and reached the board still remains a mystery. What the student could recall was an urgent call from the board requiring his presence.
Overwhelmed with curiosity and fear, he rushed to find out the reasons for such urgency from the board only to be told of his love affairs with the lecturer and his punishment.
Kelvin confessed that he slept with the lecturer on several occasions including in the lecturer’s office.
Crying for clemency and pardon, the student had broken down into uncontrollable tears, but the university senate refused to rescind their decision.

APC Gives Condition For Tinubu To Debate With…