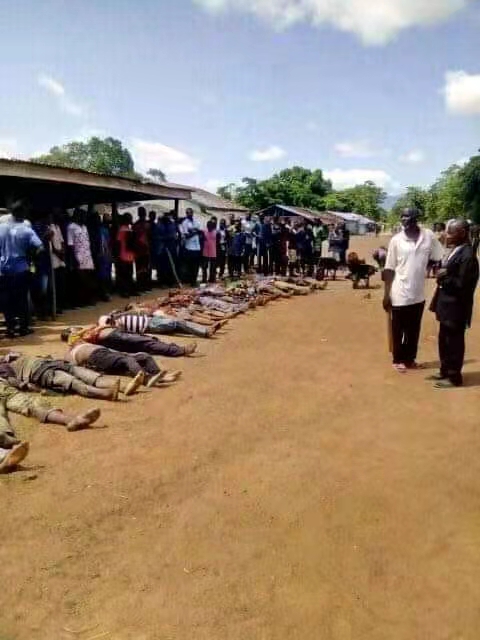 The Apex Socio-cultural youth organization of Ohanaeze Ndigbo Worldwide Ohanaeze Youth Council national President, Comrd. Igboayaka O Igboayaka has expressed acrimony over the negligence of the Governor of Enugu State, His Excellency, Governor Ifeanyi Ugwunwanyi towards his advice on how to avert envisaged brutal killing of his citizens.

Comrade Igboayaka alleged that he made the said revelation in the  early period of March, 2021 when he had a dialogue with Governor Ugwuanyi on the incessant killings of innocent Igbo sons and daughters in Enugu, but regretted that the governor never heeded to his candid advice.

The embittered Igbo youth leader revealed that Ehu-Amufu 3rd Missionary Jihadist massacre could have been averted if Gov Ifeanyi Ugwuanyi had listened to the council’s strategic counsel on how to save Enugu Land from the dreaded Fulani herdsmen bandits and Jihadist.

The National President of the youth body made this revelation while addressing newsmen in Abuja, federal capital, in reaction to the on going killings of Ndigbo in some parts of Enugu State.

It’s obvious that the State had, as at yesterday, recorded the loss of over 100 lives in the State, consequent upon the lethal attack on the people by dreaded Fulani herdsmen, as houses were also set ablaze in the course of the attack.

Igboayaka, who accused Ugwunwanyi of being engrossed in what he termed “his selfish interest in retiring to in Senate in 2023” threatened that if no adequate proactive measures are deployed to put a lasting end to the gruesome massacring of the people, “Igbo youths shall rise against SouthEast leasers”, he said.

Furthermore, Igboayaka recounted that “it was also the same thing Governor David Umahi of Ebonyi state did when I contacted him on the killings that were going on in Ebonyi. However, all Umahi could say was, I shouldn’t worry him that I should concentrate on Imo State that I am not from Ebonyi state, Igboayaka disclosed.

“when I said that SouthEast Governors are conspirators in the killings of Ndigbo by Fulani herdsmen Bandits and Jihadist it’s not a mere allegation, but it’s a fact which they have demonstrated through their deliberate continuous silence.

Continuing, Comrade Igboayaka outlined that; “One of the major responsibility of a responsible government in South-East is the protection of lives and property of Ndigbo, but if the (the Governors) cannot deny this fact that they collaborators in the maiming of Ndigbo for political gain and power, let them honorably resign and give way for those that can sign and uphold a social contract to protect Alaigbo from external invasion.

“It’s now obvious that we don’t have leaders in Southeast, none of the Southeast Governors, Senators, Federal House of Representatives members, or State House of Assembly members have made any comments or reaction on the killings of over 200 Igbos at Eha-Amufu, Enugu State.

“Our Senators and Federal Representatives in Abuja are looking for money and contracts and preparing to go back to National assembly. There’s no gainsaying that Governors, Senators, Reps members and Ministers from South-east extraction are Soulless human political elements that have more esteem for their political positions more than the millions of lives of Ndigbo.

“These political Characters must be taught a lesson in a hard way, or they will intensify in their efforts to put the lives of Ndigbo into jeopardy. These wicked characters that attach titles of Excellency,  Honorable and Distinguished are walking freely on the street, blowing siren  here and there without a tinge of feelings about the woes that have befallen on Ndigbo.

“What we have in Southeast as Governors, Senators, House of Representatives members, House of Assembly members and Ministers are bunch of political looters and leech that feed on the blood of Ndigbo.

Speaking further, Comrade Igboayaka O Igboayaka explained that “the ethnic cleansing is real in Igbo land, it has started from Enugu Axis,  just yesterday Sunday, 18 December, 2022, another massacre of Ndigbo took place at various communities in Eha-Amufu, Ebor, Umujiovu, Mgbuji, Agu-Amede, a causality that recorded the killing of over 100 people. This inhuman operation started in the early hours of Sunday’s morning and lasted up until night”.

Moreso, he recalled that on November 22 and 23, 2022, a similar attack took place in Ebonyi State which claimed the lives of over 100 Igbos with 50 people missing, adding, he said; “and again, on December 7, 2022 the same took place with over 30 Igbos killed.

“Ndigbo must pick up arm for self-defense as we’re now living in a failed country.

“I therefore warned Igbo leaders to sit up now, convoke a compulsory SouthEast Geo-political Zonal meeting and cease from betraying Ndigbo for money or political positions, otherwise, there will be a ” Political Mob Action” in Igbo land that will sweep off every political oppressor”, he warned.