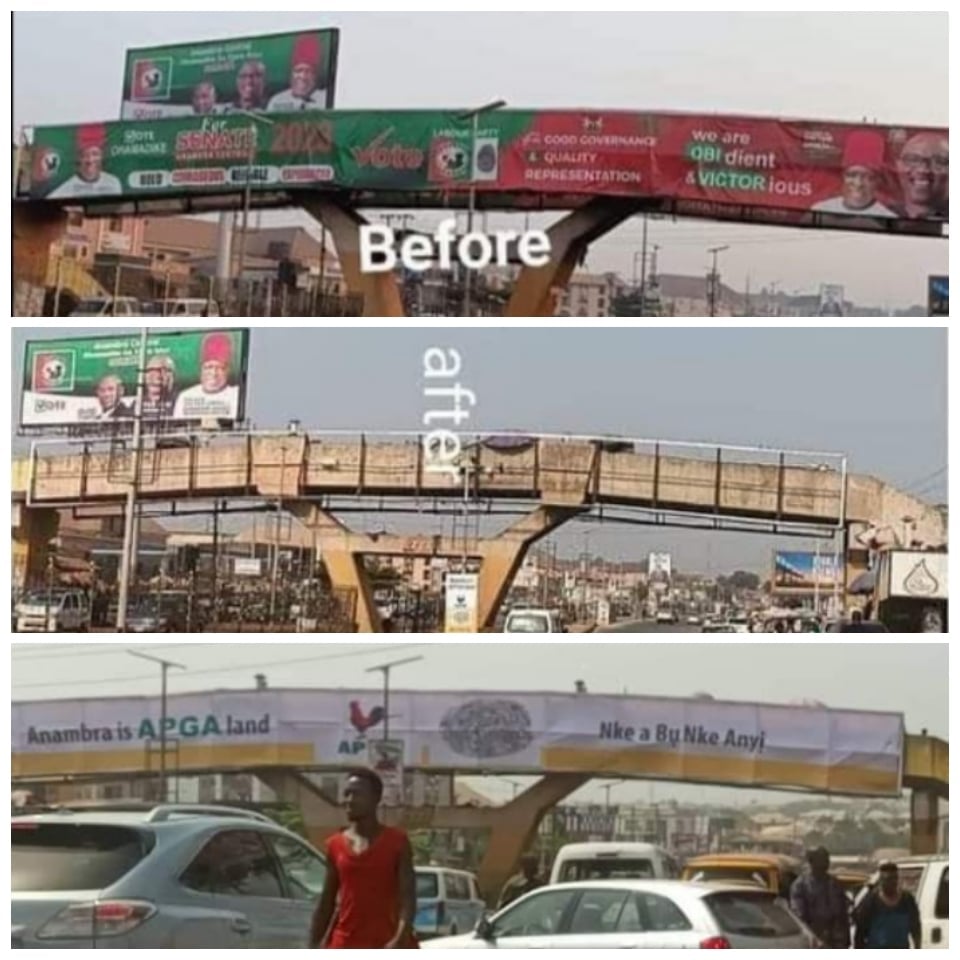 The Labour Party (LP) has alleged that the Anambra State Government has pulled down the campaign billboards of its presidential and Senatorial candidates for Anambra Central, Mr Peter Obi and Senator Victor Umeh, respectively mounted at strategic places in the state.
The party accused the state governor, Chukwuma Soludo, of giving the order in that respect. Anambra Govt Pulls Down Peter Obi, Umeh Campaign Billboards – Labour Party Alleges 4
A chieftain of the party who would not want to be mentioned at this stage of the impasse, told Journalists that Obi and Umeh’s large billboard at the Unizik Temporary Site Flyover along Enugu-Onitsha expressway, was pulled down on Saturday by the Anambra Signage and Advertising Agency( ANSAA).

He said, “The billboard at UNIZIK Temporary Site Junction along Enugu-Onitsha expressway was today (Saturday) removed on the orders of Soludo. “The advert which was placed by an APCON registered Advertising Agency was fully paid for.“Soludo said that he does not want Labour Party advert on such a strategic place and ordered the Anambra Signage Agency to refund the money it received for the advert.
“He also ordered the removal of the Labour Party advert at the Afor Nnobi Gantry. This Advert has been there since October, 2022 and was paid for five months.

See also  ROTAVIRUS: What You Must Know! Get Free Vaccine From 21st Nov. 2022 In Any Rivers Primary Health Centers

Responding to the allegation, the Managing Director of Anambra Signage and Advertising Agency (ANSAA), Mr Tony Ujubuonu, confirmed that the LP billboard was removed on Saturday but not on the orders of the state governor, Chukwuma Soludo.

He said, “Whatever that was removed was as a result of a challenge we had with the agent that erected the board. First and foremost is that the bridge you are talking about was having a Labour Party billboard. If you recall in August, we sent out a message to all political parties to pay up their campaign fees.
“There was a lot of hullabaloo about it. None of them has paid their own. So most of the parties that have not paid theirs that have adverts on government assets were removed. It has nothing to do with the governor. Governor didn’t give any order. If they said they paid, the campaign fees, let them give me any evidence, I should know, I’m the the ANSAA MD.
“They didn’t pay the campaign fees and we spoke to their media heads several times; we informed them about the enforcement, and they haven’t paid it so we decided to take down the advert. It has nothing to do with the governor. Anybody that tells you anything about the governor and the billboard is telling you lies.