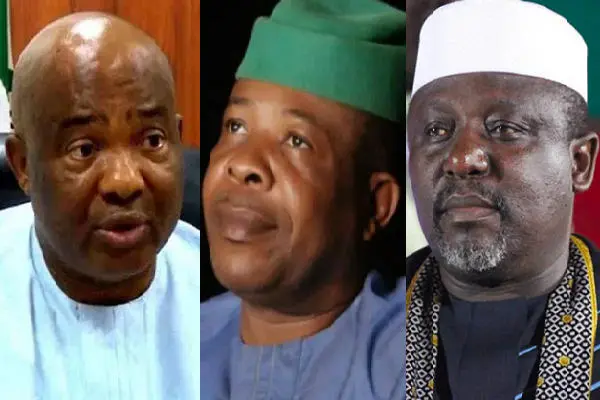 The Indigenous People of Biafra (IPOB) has warned politicians in Imo State such as Emeka Ihedioha, Ifeanyi Ararume, Rochas Okorocha, and many others who contribute to the insecurity in Imo State because of the political fighting and power struggle that emanated from “illegal imposition of Hope Uzodinma as Governor by the Nigeria Supreme Court” to stop spilling blood of innocent citizens for their dirty politics.

IPOB made the call in a press release signed by the Media and Publicity Secretary for IPOB, Comrade Emma Powerful, on Sunday over “the ongoing attacks by the Nigerian security agencies and Ebubeagu militia against civilians” on peaceful communities in Okigwe, Imo State, in the past one week.

According to Emma Powerful, “the Nigeria Army, Police, and Ebubeagu invaded Aku, Umulolo, and Ihube communities in Okigwe LGA last week, killing people, abducting innocent citizens, and burning down properties. “The surviving residents have abandoned their homes for fear of being abducted or shot dead,” he added.

The IPOB scribe expressed great displeasure over what Hope Uzodinma and his collaborators have turned peaceful Imo State into.

“We don’t understand what Imo indigenes did to Hope Uzodinma and his political rivals that warrants these reckless killings and destruction from the man who claims to be a governor.

“We find what is happening very distasteful and distressing. Imo people are dying every day and night under the supervision of Vampire Hope Uzodinma,” he lamented.

Emma Powerful stated: “These men hired armed militias from Niger Delta to do their bidding.

“In turn, Hope Uzodinma hired and recruited some militants from the same Niger Delta territory his fulanized Ebubeagu militia. These rival political armed groups have turned peaceful Imo State into a war zone.

“As these politicians fight their political rivals, the Nigeria Government capitalize on it to blackmail IPOB.

“Anytime Nigeria Security agents attack the camps of these political thugs and make an arrest, they are paraded, and they are told to claim to be working for IPOB or ESN as a bargain for lesser punishment or for a softer landing.

“In the process of attacking these political criminal camps, neighboring communities are razed and innocent people killed by invading terrorist soldiers.

“We know that the Nigeria government and her compromised security agencies are humiliating our people to spite and show hate for Mazi Nnamdi Kanu and the Biafra struggle. “Unfortunately, to them, our people understand the truth and the gimmicks of our enemies.

What Kylian Mbappe Said About Lionel Messi That…