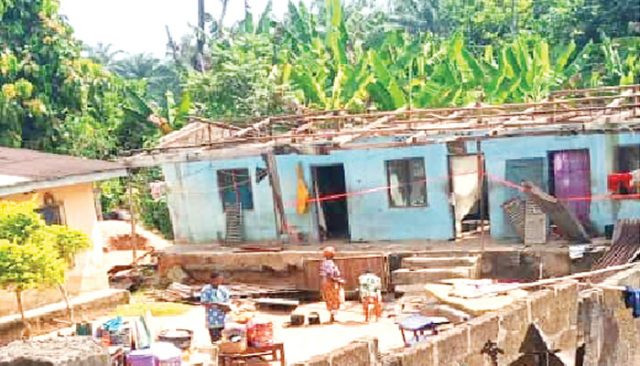 75-Year-Old Widow, Mother Of 5, Ejected From Her Husband’s House By Stepson, Calls For Help

A 75-year-old widow, Mrs. Dorothy Onwudirimba, has accused her stepson simply identified as Okonkwo, of forcefully ejecting her from her husband’s house and destroying the property on December 6.

According to  the grandmother alleged that Okonkwo obtained a court order without her knowledge to carry out the destruction of their property at Umuntumogu in the Okwuohia Obowo Local Government Area of Imo State.

In a video recording, the widow could be seen lamenting and weeping as some men removed the roof of the house and threw her property outside. Narrating her ordeal, the mother of five said;

“Last Tuesday, I was at home when the carpenters and police officers armed with guns drove into our compound and started removing the roof of my house. I was amazed and started asking them why they were removing my roof, but they didn’t answer me.

When the police left our compound, one of my stepson’s children, Chinonso, entered the house and started throwing my property away. My children and I lost a lot of our personal belongings, including money.

After that, we were locked outside the house by my stepson and we are now stranded in our community; my daughter-in-law who gave birth a few days ago is somewhere with her baby while I’m now in someone’s house. ”The grandmother said she informed the traditional ruler of the community about the incident, urging the government to come to her aid