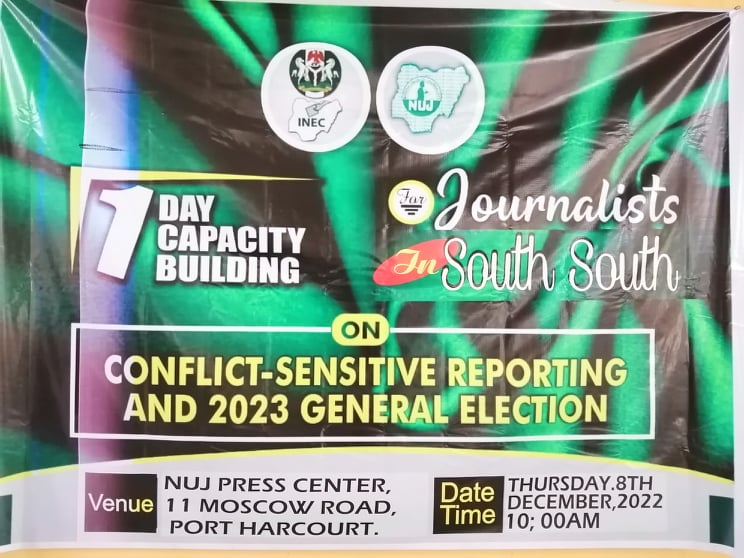 Journalist in Rivers State have been urged to promote democracy developments and also raise alarm if Government agencies fails to discharge their clear functions as government in performing these functions,

The National president of Nigeria Union Of Journalist NUJ  Christopher Isiguzo  made the call at a one day Training for Journalists organised in collaboration with INEC on Conflict Sensitive Reporting and 2023 General Election,  held at NUJ Press Center, Moscow Road, Port Harcourt, 8th December, 2022

The NUJ President in his welcome address delivered by State Chairman, Stanley Job Stanley said  “As Media Professionals, we see it as a cardinal objective to promote democracy and development and therefore we shall continue to work with INEC to ensure that democracy works properly in the Country as elections are also an essential factor in the process of democracy.

He noted that government officials are expected to be honest, responsible, transparent, accountable, efficient in administration and services delivery while it is the responsibility of the media to raise red flags Where any of these is lacking or is deliberately subverted,

Chris Isiguzo also Highlighted that the safety of Journalists is absolutely essential to the Civil, political, economic, social and cultural rights of all citizens as well as the right to development. “It is an incontrovertible fact that the indispensable functions of the media cannot be performed without the guarantee of the safety of Journalists and media workers  It should be noted however, that in the course of their work over the years many journalists have either lost their lives or had sustained various degrees of injuries or had their equipment damaged especially during election times with little or nothing is done to ensure accountability for attacks on journalists and the media in Nigeria, thus the culture of impunity for such attacks persists. It is important for Stakeholders to work towards minimizing these attacks.

He also Urge Journalist to help to mobilize the populace to participate in the process of governance and development. ‘The NUJ believes that for the masses of this country to actively participate in the democratic process, the media itself must be strengthened to ensure that some of the mechanisms through which community empowerment can be achieved are put in place, and this includes the unhindered access to information, and proactive initiatives like this with INEC which is aimed at strengthening the way and manner Journalists perform their work during election times. and therefore we shall continue to work with INEC to ensure that democracy works properly in the Country

A COMMUNIQUÉ Issued at the end of the training Reads as follows:

The NUJ in Rivers State appreciates the leadership of NUJ, the Management of INEC including participants for organizing this all important capacity building workshop that would equip journalists in Rivers State to adequately cover the forthcoming 2023 general elections in the State.

The NUJ calls for continues training and partnership with INEC during and after the general elections.

INEC should ensure free flow of information as to guide journalists to report adequately to the public in preparatory to their activities regarding the conduct of 2023 general elections.

INEC should include journalists as critical stakeholders in their security arrangement as to protect media personnel covering the 2023 general elections. Journalists on their part, should be professional and exhibits ethical conducts in discharging their duties during and after the elections .We commend INEC for the various improvement recorded in the conduct of elections in recent times through deployment of improve technological devices that have ensured credible elections. Politicians should play by rules of the game in line with the new Electoral Act 2022, so as not to heat up the political space across the country. Politician should exhibit the spirit of sportsmanship and accept the outcome of election results.

Insurance Consumers Appeals To NAICOM To…

Why, I Sell Most Of The…