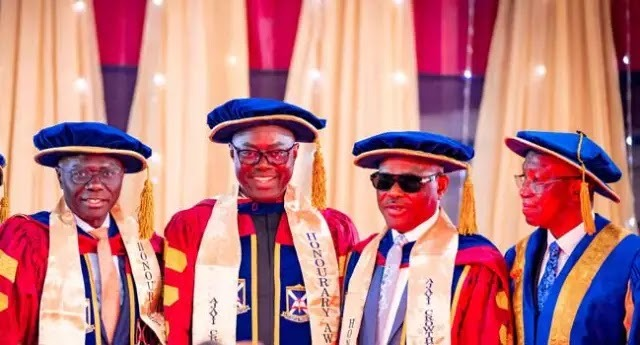 RSU Gets 1Bn, Funding From Gov Wike, To Improve College of Medical Sciences

The Rivers Governor, Nyesom Wike has been conferred with the Honorary Doctor of Law Degree (Honoris Causa) by the Rivers State University (RSU).

The Governor, who donated N1bn to the school, called for a change in the educational standard insisting that the RSU must benchmark its academic programmes to meet global demands.

Wike, who spoke in Port Harcourt at the 34th convocation of RSU on Saturday in Port Harcourt, said his administration had invested funds generously to improve infrastructure in the school and establish faculties particularly the College of Medical Sciences.

Wike recalled that at the inception of his administration, he constituted the Governing Council of the institution and charged them to develop the blueprint that would engender sustainable transformation in the university.

He explained that his administration also resolved the lingering strike of the academic staff and recalled the staff unjustly dismissed for union activities by the previous government.

The Governor said the action he took within his first two weeks in office restored industrial harmony to the institution.

The trio was at the foremost Anglican university in Nigeria to receive degrees in different disciplines during the institution’s 14th convocation ceremony on its campus in Oyo.

Gboyega Akosile, the Chief Press Secretary to Governor Sanwo-Olu disclosed this in a statement, saying his principal was conferred with the Doctor of Public Administration (Honoris Causa).

The Pro-Chancellor and Chairman of, Governing Council, Chief Dr. Wole Olanipekun, said the three recipients of the university’s honorary degrees have practically demonstrated their goodness, adding that the awards were in recognition of their distinguished commitment to improvement and betterment of human life.

He said Governor Sanwo-Olu has been a tested and proven loyal public servant in Lagos State, before emerging as the Governor on May 29, 2019.

“As the 15th Governor of Lagos State, he (Governor Sanwo-Olu) continues to give meritorious service which enhances the lives of Lagos inhabitants in the various sectors of education, health, transportation, trade, and commerce. He demonstrates healthy and practical dedication to productive governance,” he said.

The Vice Chancellor of the Ajayi Crowther University, Oyo, Prof. Timothy Adebayo, said Governors Sanwo-Olu, Wike, and Makinde were selected and conferred with honorary doctorate degrees because of the good works they have been doing even before becoming governors.