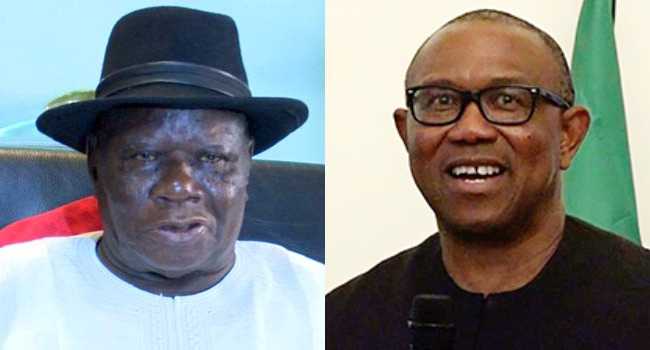 Chief Clark announced his position at a news briefing in Abuja on Tuesday.

The elder statesman based his endorsement of Mr Obi, who is the Presidential Candidate of the Labour Party on traits he believes are critical to leading the country.

Explaining further, he cited honesty, trust and transparency, all of which he said Mr Obi displayed when he was governor of Anambra State.

Chief Clark called on Mr. Obi to tackle the issues of the injustices and environmental degradation in the Niger Delta region if elected as President.

However the Presidential Campaign Council of the Labour Party has welcomed the decision of foremost Ijaw leader and Nigerian statesman Chief Edwin Clark to endorse Peter Obi for the forthcoming election.

“The both posses the track record, commitment and zeal to confront the monster that has held this giant nation down for decades.“We look forward to more endorsements just as we expect the ultimate endorsement of the generality of Nigerians come February,” the spokesman of the Labour Party campaign council said in response to the decision of Clark to endorse Peter Obi.

5 Persons Including A PDP Chairman Killed In…