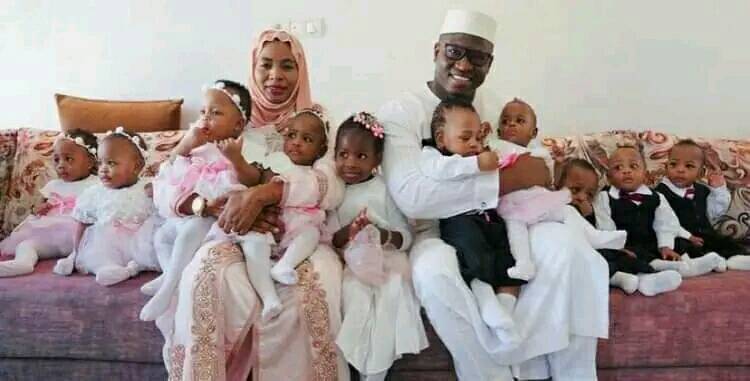 A mother who gave birth to nine babies born at the same time has taken them back to Mali after they spent the first 19 months of their lives in Morocco.
Halima Cissé gave birth to the five girls and four boys at a hospital in Casablanca, Morocco’s largest city, after she was flown there last March for specialist care.
Two months later, Adama, Oumou, Hawa, Kadidia, Fatouma, Oumar, Elhadji, Bah, and Mohammed VI were born prematurely via Caesarean section
.

They were born 30 weeks into Mrs Cissé’s pregnancy and each weighed between 500 g and 1 kg.
The Malian government flew Ms Cissé to Morocco’s Ain Borja clinic after becoming concerned for her welfare and the chances of the babies’ survival.
Husband Abdelkader Arby, a sailor in the Malian Navy, remained in the West African nation during the birth to care for the couple’s three-year-old daughter, Souda.
The nonuplets celebrated their first birthday in Morocco. According to Guinness World Records, the family held a small birthday party with just a few nurses and neighbours from their apartment building.
Nonuplets are extremely rare and often complications occur in multiple births of this scale, which can result in some of the babies not surviving to full term.
The previous record for the most children delivered at a single birth to survive was set in 2009, when American Nadya Suleman, aka “Octomom,” had eight babies.
See also  Labour Party Lagos State Chairman Resigns Hands Over To Mrs Dayo Ekong